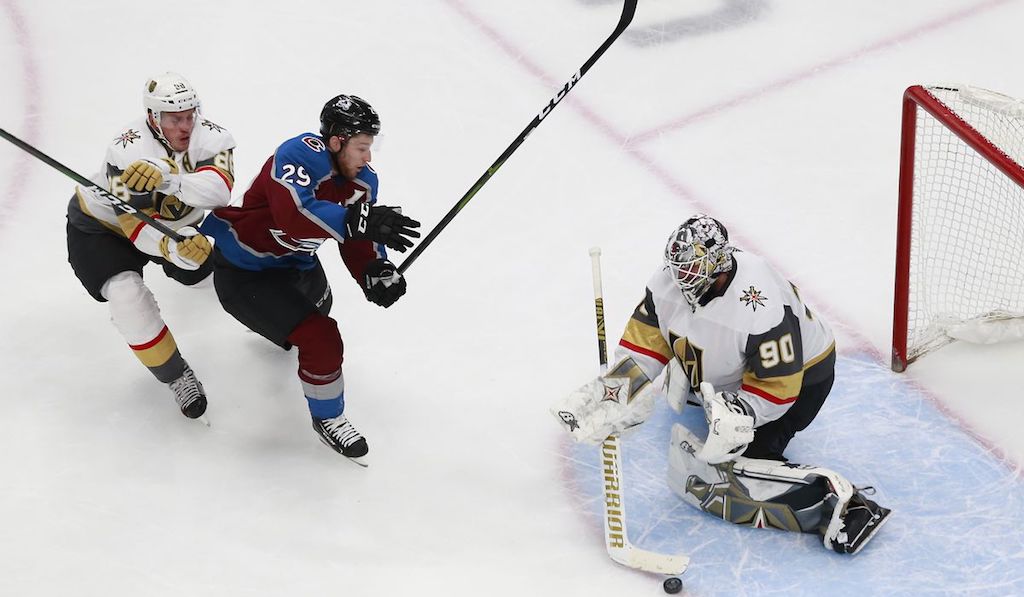 Just under a week into the NHL season, we’ve already seen some remarkable hockey. But now it’s time to look at 2021 Stanley Cup favorites.

The Minnesota Wild rallied twice from two-goal third-period deficits to win in overtime. The Capitals and Penguins went back and forth, needing a shootout before Pittsburgh won. Ottawa’s Tim Stützle, the third overall pick in the 2020 Draft, is already making waves in the NHL.

ONLINE SPORTS BETTING – HOW TO BET ON HOCKEY

Here, we’ll recap the top three betting favorites for the Stanley Cup early in the season.

The Avalanche split their season-opening series with the St. Louis Blues, with opposite outcomes in each game. Colorado stumbled out of the gate, losing 4-1 to the Blues in the opener.

However, Colorado responded in its second game, rolling past those same Blues for an 8-0 win. Captain Gabriel Landeskog led the way with a pair of goals, while Nathan MacKinnon had a goal and two assists.

The depth scoring contributed as well. Joonas Donskoi and Nazem Kadri found the goal column, and newly acquired defenseman Devon Toews lit the lamp for his first of the year.

It’s a small sample size, but early on, Colorado looks lethal if it remembers to show up. They are on top of the list of 2021 Stanley Cup favorites at top hockey sportsbooks.

Some hockey fans and writers wondered how the absence of Nikita Kucherov would impact Tampa Bay’s offensive firepower. Two games in, it seems those doubts can already be put to bed.

Tampa Bay picked up where it left off after winning the Stanley Cup last season, as the Lightning rolled through their series with the Chicago Blackhawks. The Lightning won 5-1 on Wednesday and 5-2 on Friday.

Andrei Vaskilevskiy was in net for both wins. The 2019 Vezina Trophy winner looks like a strong candidate to win the award again this year.

Another player whose performance should come as no surprise is Steven Stamkos, who is the team’s leading scorer. He is tied with four other players (Philadelphia’s Travis Konecny, Toronto’s John Tavares, and Edmonton’s Connor McDavid and Leon Draisaitl) for the league lead in points.

After offseason surgery to repair a torn core muscle, Stamkos is back and looking stronger than ever.

It’s incredibly likely we see Vegas and Colorado meeting in the West Division final. Before realignment, they appeared to be the two best teams in the Western Conference. Now in the same division, the collision course seems inevitable. Both squads need to be considered when betting 2021 Stanley Cup favorites.

Like the Lightning, the Golden Knights won each of their first two games of the season. They started the season with a 5-2 win over the Anaheim Ducks, then needed overtime to beat Anaheim 2-1 in Game 2.

Utilizing their goalie tandem early, Vegas has had both Robin Lehner and Marc-André Fleury start a game. They will likely alternate starts for most of the season, but Lehner is expected to have a larger workload as the season progresses. Although they truly cannot be considered underdogs, betting NHL underdogs can a lot of time mean big profits.

Fresh off being named the first full-time captain in Golden Knights history, Mark Stone leads the team with four points to begin the campaign (one goal, three assists).

Next up for the Golden Knights are four straight games against the Arizona Coyotes, with two in Vegas, then two in Glendale, Ariz.