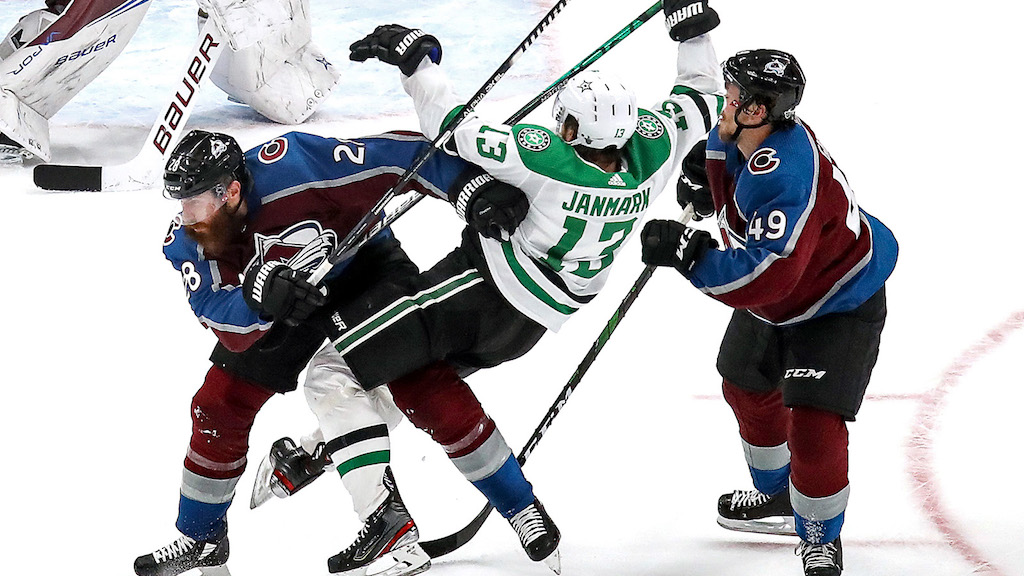 It’s on to the 2020-21 NHL season after the Tampa Bay Lightning won the 2020 Stanley Cup in one of the strangest hockey seasons on record. Who will win the 2021 Stanley Cup?

The coronavirus interrupted the 2019-20 season, which picked back up in the summer and ended in late September.

HOCKEY BETTING 101: WHAT IS A HOCKEY GRAND SALAMI BET?

With the adjustment of last season’s schedule, the 2020-21 campaign is set to begin on January 1, 2021. The Lightning, which won their second Cup in franchise history, are among the favorites to next season’s Cup. Tampa Bay is not the favorite though.

There are a handful of rosters in the NHL that feature multitudes of talent, both young and old. None compare to the Colorado Avalanche. If you’re looking for value in a NHL futures wager, you need to look at the Avs.

Nathan MacKinnon scored 90-plus points for the third straight season and did it this year in just 69 games. It was his third straight 35-plus-goal season as well.

Add in forwards Andre Burakovsky (20 G), Gabriel Landeskog (21 G), and Mikko Rantanen (19 G) and the Avs are loaded on offense.

The only question is goaltender Philipp Grubauer who went 18-12-4 in the regular season last year with a .916 save percentage and a 2.63 goals against average.

Oddsmakers believe in Grubauer enough to make the Avalanche a +650 favorite to win the 2021 Stanley Cup.

Lightning, Vegas in the Mix

Tampa Bay has finished with one of the best records in hockey in each of the past three seasons. There’s no reason to doubt the Lightning as 2021 Stanley Cup contenders.

They will return Nikita Kucherov, the team’s leading scorer with 33 goals and 85 points as well as a healthy Steven Stamkos, Brayden Point, and Victor Hedman.

Goaltender Andrei Vasilevskiy, who was outstanding in the postseason posting a goals against average of 1.90, will also be back. That’s why Tampa Bay is listed at +700 to repeat as Stanley Cup champion in 2021.

Vegas is also listed at +700. The Golden Knights actually earned the top seed in the Western Conference last year. Vegas beat Chicago and Vancouver to advance to the conference finals where they were upset in five games by Dallas.

The Knights should return most of their roster which starts with veteran goaltender Marc-Andre Fleury who went 27-16-5 in the regular season last year. The Knights had eight players score at least 20 goals led by Max Pacioretty’s 32.

If you’re looking for more free and premium NHL picks when the season gets rolling again, head on over to Action Sports Picks to get on the right side of the action.

The Bruins should take the advice of the band that calls themselves Boston and not look back. The Bruins had the best record in last year’s regular season and then fell apart when the season resumed.

They wound up the fourth seed in the Eastern Conference and were eliminated in the second round by Tampa Bay in five games. Goalie Tuuka Rask opted out of the postseason and the rest was downhill.

Still, Boston has one of the top lines in the league with David Pastrnak, Brad Marchand, and Patrice Bergeron. The Bruins may have some changes in their third and fourth lines and as a result they are listed at +1200.

Bettors might want to hop on the Dallas Stars “no respect” train. The Stars battled their way to the Stanley Cup Finals without their starting goalie Ben Bishop.

Bishop will return this coming season and you can bet the Stars will continue to play that lockdown defense that allowed them to beat St. Louis, Colorado, and Vegas on the way to last year’s final.